Order picking (also called "picking”) consists of collecting and combining non-unitary loads to assemble an order for a customer. This can be done in almost any type of warehouse, and always takes place when there is a need to combine packages, parts, products, or materials and, once combined, to transfer them.

The picking and handling of unit loads are connected to the restocking cycle and to the dispatch of prepared orders.

This activity can be carried out in many ways, from the simplest method (in which the operator moves around the facility collecting the units) to the most sophisticated (such as those based on fully automated systems with mechanised picking). Each of these methods is ideal for certain circumstances, but also has its own limitations.

Example of a pallet rack warehouse with order picking

Impact of picking on investment

To understand the financial impact of this activity on a warehouse, one need only say that in a badly-planned facility, picking costs can account for more than 60% of operating costs. Reducing the impact of picking to the minimum tolerable level can mean the difference between a competitive company and an uncompetitive one, between staying in the market and going out of business.

This section (order picking) is where the greatest planning effort needs to be focused. It is also the activity that is experiencing the most advances in applied technology and it is expected that in the future, new products will become available to reduce the added cost of order picking. 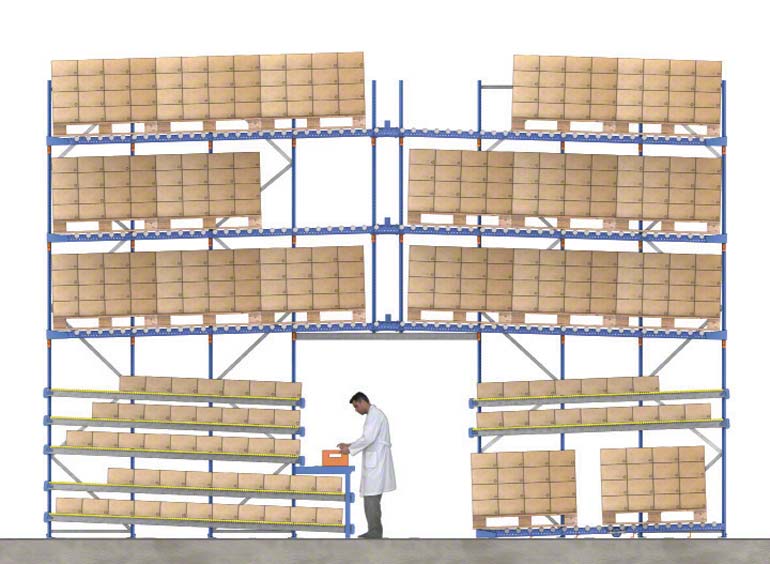 Example of picking off carton flow racks with reserve pallets on upper levels.

Picking can be done in many different ways and, while all of them are valid, some have greater financial impact than others and a different level of initial investment.

The example of an order picked directly from a pallet located on the lower levels of a racking unit with storing reserve pallets in the upper part is a valid solution when there is not much picking to be done or the warehouse is small. With the right equipment, picking can also be carried out using the full height of the racking unit. This is a good solution for low rotation products. These two options use the man-to-goods strategy, which requires the operator to move around the warehouse. In most cases, this leads to high costs.

So should other alternatives be considered? That depends. The use of an alternative picking solution will only be profitable if the reduction in the added cost is sufficiently large and if it provides the best ROI, an issue that can be addressed by studying each available option and the tools and strategies applied. This is explained in the following sections.

All picking operations are measured by the number of preparation lines. There are several options for storage systems based on the person-to-goods principle to increase these lines.

The first is to install a warehouse management system (WMS) which, among other things, minimizes the trips made by the operators in terms of both number and distance. The right layout of the warehouse and the goods will also help with product picking operations.

Similarly, personnel can work more quickly when the use of paper is avoided. To do this, staff can be provided with radiofrequency or voice picking devices and equipment. Operations can be improved by preparing orders in waves (several at the same time) or by grouping them together.

Of course, infrastructure can also speed up operations. One example is carton live storage units with the pick-to-light system, where lights are placed in front of each station. These lights indicate from which positions the product has to be removed, and in what quantity. Put-to-light systems, where light devices indicate where the units have to be placed for each order and in what quantity, can also speed up operations when fitted in picker trolleys or machines.

Beyond these measures, further increases in the capacity to form order preparation lines can only be achieved by using goods-to-person strategies, in which the operator does not have to move from his station and the goods come to him.

The following is an analysis of the different ways of preparing orders. They are divided into the two strategies mentioned above: person-to-goods and goods-to-person. 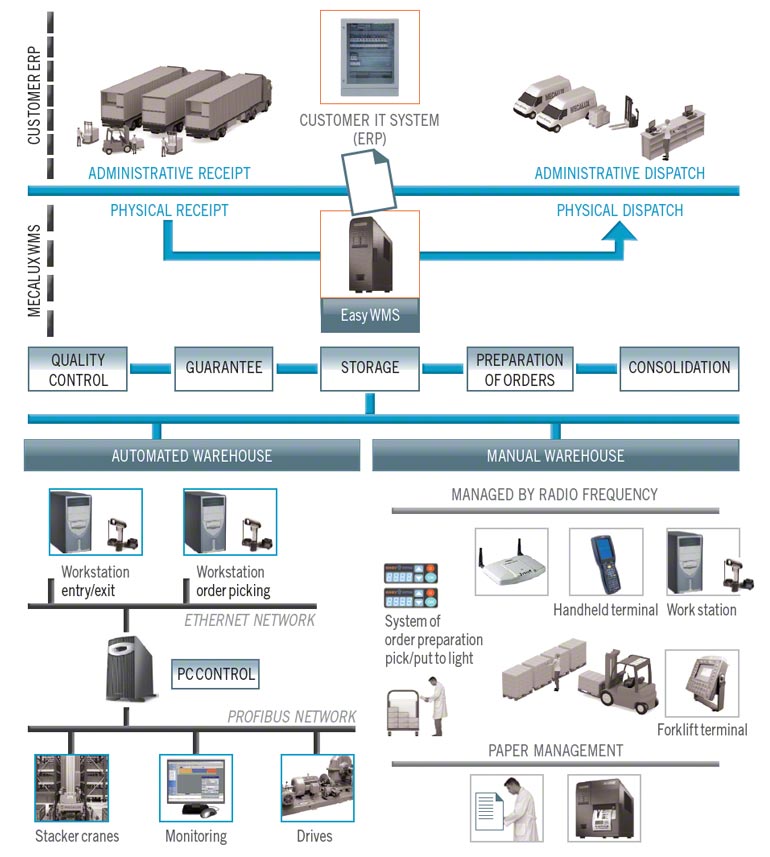 The installation of a warehouse management system (WMS) makes it possible to increase the number of order picking lines.