Different high-level picking methods can be used: using a single space for each SKU, using various spaces for the same SKU in the same aisle or over several aisles,  allocating a single aisle to the full preparation, or using different areas with the SKUs grouped into batches in various aisles. Each of these options is explained below.

How to perform high-level order picking

In the first method mentioned, each SKU takes up a single space (no more than one space) in the warehouse. This helps set a routine which improves preparation to such an extent that if the entire warehouse is unified in such a way that the SKU-space relationship remains constant over an indefinite period, orders can be prepared in a fully automated procedure.

Although the above cannot be achieved in full, the memorisation of the SKU location-space by the preparer helps reduce preparation times. On reading the SKU to be picked, the person simply moves, almost mechanically, to the location for that SKU without having to check where the space is located.

The second system involves several spaces in the same aisle for a single SKU. This method also helps reduce preparation times, in particular when the aisle contains a large number of spaces due to its height or length. Placing the same SKU in different locations along a single aisle helps reduce movements along that aisle.

However, this method can only be applied if there is a system for real-time communication between the operator and the management software. The final decision as to whether to remove the specific SKU to be picked for an order from one space or another is made by the operator preparing the order. The order must therefore be immediately communicated to the system, so that the system can program the restocking of this SKU in the position from which it has been removed, and not in another position.

The third method mentioned, with several spaces for the same SKU in several aisles, makes it easier to conduct operations. It is only suitable when there are several preparing orders at the same time. With this system, operators avoid long and complicated movements along the length and height of the various aisles. In this case, the use of a system for real-time communication between operators and the central computer is highly recommended (even more so than with the previous method).

The fourth working system, that which a single aisle to complete the entire line, is useful when the ratio of orders to the number of SKUs is very high and the operation must be extremely fast. To achieve this, the quantities of each SKU stored can be distributed across different aisles, so that they are all available in each aisle and, therefore, the complete order can be prepared. This does away with the need for operators to move between the aisles, enabling them to prepare orders at high levels in very little time.

The fifth operating system is a variant on the previous method and consists of grouping the SKUs into different areas, so that an order can be consolidated in each area, independently of the other areas. Using this system, operators work in a specific area, although they do need to change aisles frequently. This system is slower than the previous one but, since it does not require such a continuous change in personnel, its effectiveness is fairly similar. Furthermore, it is more cost efficient due to the fact that fewer operators are required. 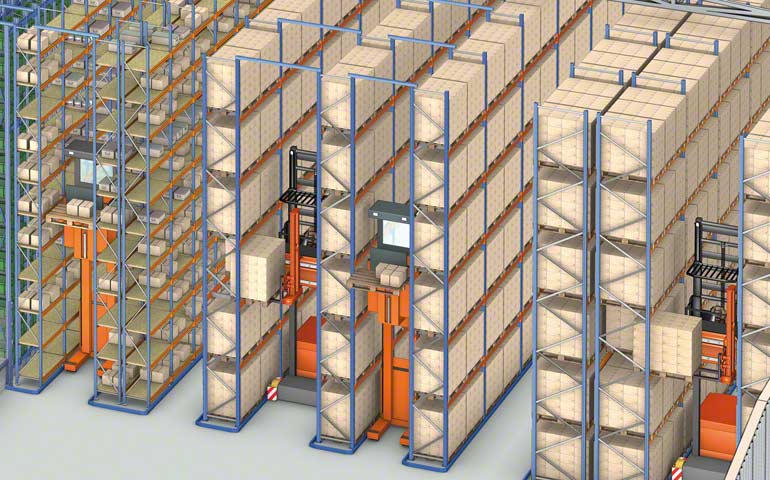 Orders can be prepared on higher levels using three different types of equipment. High-level pickers are specifically designed for this task and are very similar to mid-level pickers in their construction, from which they are derived. These machines can operate to a height of up to 10 to 11 metres.

It is also possible to use combi VNA trucks, in which the driver is lifted along with the load, providing direct access to loose units or pieces stored higher up. 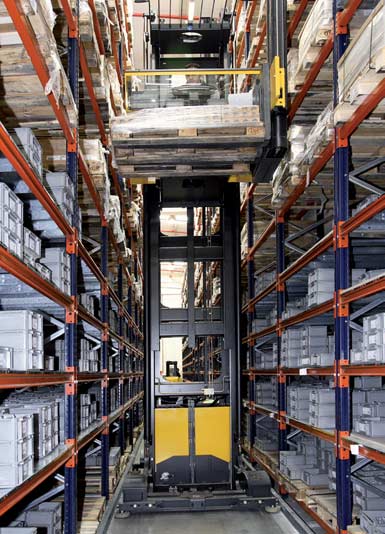 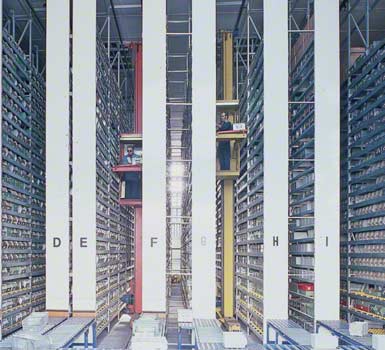 Warehouse for an electronic components manufacturer.

The third option is to use medium-height stacker cranes (between 10 and 11 metres), which include an element which allows a man to ride on board, removing units from the racking units. This type of machine is practically no longer in use, since automated picking stacker cranes (explained later), which adopt a goods-to-person strategy, or picking robots, can now be used.