Counterbalanced forklifts used to load, for example pallet racks, get their name from the large iron counterbalance they carry at the rear. They have a cantilever loader, which means they carry the load in front of their support point. They operate according to the first degree lever principle, in which a weight, called the effort, can lift another weight, called the resistance (the load), supporting itself on an intermediate point called the fulcrum. 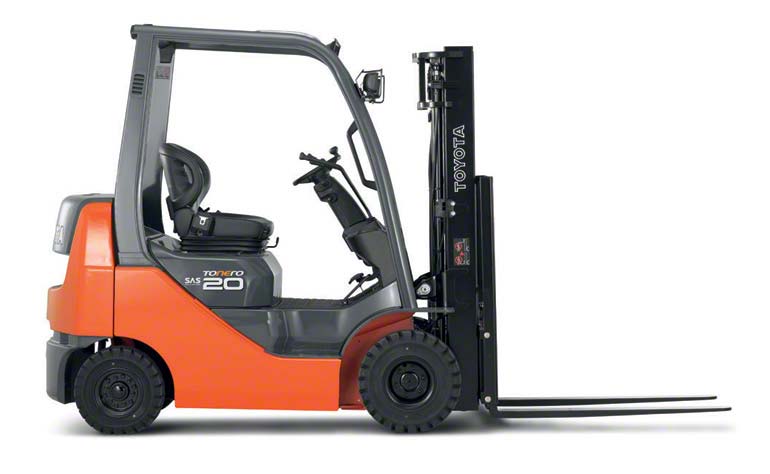 Counterbalanced forklifts carry their loads in front of their support point. (Image provided by Toyota).

In counterbalanced forklifts, the effort weight consists of the entire machine including the chassis, which in turn contains the motor, transmission, hydraulic pump, and other control devices. The counterbalance, normally screwed into the back of the chassis, and the axles (the front one for driving and the rear one for steering, so that the machine is easier to manoeuvre) are also part of the effort weight. While part of the forklift, the mast, fork carriage, and forks are included in the resistance weight since they are in front of the center of the front axle, which acts as the support point or fulcrum. The resistance weight consists of all elements in front of the support point, such as the load that needs to be transported.

Why is it so important to understand the role of each element in this lever system? Because the dimensions of the machine, its weight, the counterbalance, and other elements will define the nominal load that the forklift can handle and lift. Furthermore, the distance from the mast to the gravity center of the load will also influence its nominal capacity. The greater the distance, the lower the load capacity.

In terms of their use, apart from being very fast, counterbalanced forklifts are ideal for working both inside and outside the warehouse. However, due to their construction and design they are particularly good for outdoor operations. They are also ideal machines for loading lorries, as only the forks stick out in front.

When using them in a warehouse, it is important to bear in mind that the lifting height of these forklifts is usually limited to 7.5 m and that the normal working aisle adapted to these elements must provide 3.2 to 3.5 metres of free space. 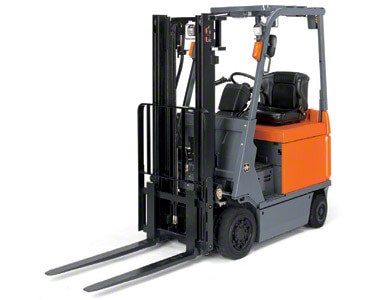 Counterbalanced forklifts are the best for both indoor and outdoor warehouse operations. (Image provided by Toyota)

The aisle can vary considerably with this type of machine, depending on the load and on its construction. So, in some cases aisles of over 4 metres may be required. It is therefore important to choose the most appropriate machine for each facility.

In addition to the features already discussed, one of the main differences between the models found on the market is how they are powered. Some machines are battery-powered, while others are thermal or powered by gas or diesel.

Similarly, there may be differences in the types of mast included. Masts are built based on the lifting height provided and can be: double, with two telescopic bodies that extend when lifting begins; double with full free lifting, in which, unlike for the previous type, the telescopic mast does not extend until the fork has been completely raised; and triple, with three telescopic bodies.

One final feature, which can vary from model to model, is the type of forks used. Some machines use forks that move sideways and oscillate to make it easier to pick up and deposit pallets.